IS A LASER SECURITY SYSTEM THE BEST WAY TO PROTECT MY HOME?

With so many different security systems out there, how can you know which one is going to be the best for your home? It can be difficult because you have to look at all those options and consider your house and everything else that goes along with it, but what if you’ve come to the conclusion that you want to use a laser security system for your home? Well, it’s time to take a closer look at a laser light alarm system and see just why it may or may not be the best option for you and your family to be safe.

What Is A Laser Security System? 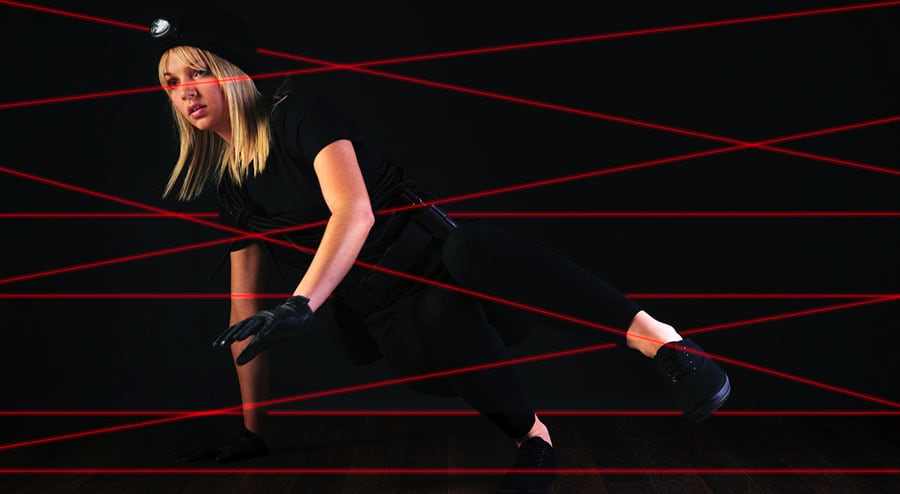 So, we’re going to take a look at how laser security alarm systems actually work because it’s important to understand what it is before you decide whether or not it’s going to work for you and your family.

This type of system uses a laser or series of lasers to create a sensor alarm circuit to protect your family and your area. Lasers are different from other types of light because they create a narrow line of light (like a laser pointer) whereas others, like flashlights, tend to spread it out.

When you turn on a flashlight you’ll have a direct area that offers the most light and then as you spread out you’ll have less light. A laser doesn’t have this kind of bleed off area.

The laser will create a continuous stream of light in the form of that beam and that means the yard will always be protected in exactly the same way as long as the system is on. If something steps into the middle of a beam and interrupts it on the way to the detector it will send out an alert immediately.

When the warning system is triggered there are a number of different ways that it can react. Some systems will trigger an audible alarm such as a buzzer or a ringing. These will trigger immediately when the laser beam line is broken and will alert the intruder that they have been detected.

Others may automatically dial emergency services or a type of monitoring company that will immediately check to see what has caused the problem and if there’s a need for immediate assistance.

This may create an audible burglar alarm as well as a silent one or may only trigger the silent alarm so the intruder doesn’t even know that they’ve been detected. Finally, you could set it up to trigger the electronics of your house, causing the exterior lights of your house to react to the intrusion.

This will alert the intruder that they’ve been detected but it’s also going to make it a whole lot easier for anyone around you to notice what’s going on and to get more information.

The police or other law enforcement will also be more easily able to detect the problem and, where it’s coming from, which can help keep your family even safer in the long run.

The Advantages Of A Laser Security System The first thing we’re going to look at are the benefits of this type of burglar alarm system. After all, you want to know the reasons that you should even consider it for your family and why you should be thinking that it’s a viable option.

There are several benefits and several reasons that it could be something you enjoy using and that you can really trust to keep your family safer and more prepared for anything that might come your way during the night or when you’re away from home.

The first benefit is that you’re going to have the freedom to build the system yourself. That’s not just to say you get to put up all the pieces and get it running on your own.

Rather, you’re going to have the ability to choose the pieces that you want and completely customize the system that you’re getting. This is great because it means you’re not going to have a one size fits all type of security system.

Every home and family is different and with this type of system, you’re going to have all the freedom that you could want to get the system just like you need it. This is great because it means your system isn’t going to be exactly like the one that your neighbor has or anyone else, which makes it more difficult for an intruder to figure out the system and use it to their advantage.

Next, the laser beam is what’s going to effectively create your security system. If something breaks the beam as it travels it’s going to signal the system that something is happening that shouldn’t be.

That laser beam is going to travel a very long distance without degrading or breaking down, which means that you’re going to have a very secure perimeter for your household and you’ll have a decent distance to it as well.

You won’t have to worry about protecting your house far enough out because that laser beam is going to travel further than you might think. It’s also able to reflect and bounce around several times in that distance, meaning a single beam can cover more distance than you might think.

Another benefit is that you can get started on one of these types of systems for a relatively low cost. That means you won’t have to worry about forking over a whole lot of money in startup costs and then keep it running.

You’ll be able to spend just a little to get started and make sure that your family is going to be safe and comfortable staying in that house or even leaving it for an extended period of time.

The system can start to go up in cost as you start adding on other pieces, but we’ll get to that a little later. Just keep in mind at this point that you can start out setting up a system that will protect you at a lower cost.

The Disadvantages Of A Laser Security System While there aren’t very many disadvantages, for some people these can be bigger problems and more important ones that need to be considered, which is why we’ve chosen to focus on these two areas rather than anything else. Only you can decide if this is a problem for you or if this is going to be just fine to protect your family.

The first negative is that the system for this type of security is actually very visible. There are cameras, boxes, reflectors and a whole lot more that need to be set up and each of those things is likely going to be easily spotted by someone that wants to cause trouble or break into your home.

Cost Can Get Very Expensive

Next, the cost can get quite extensive when you’re looking at this type of security system. While you can get started at a low cost and you won’t have to worry too much about that, the more sophisticated the system that you want the more money you’re going to have to spend.

You may want to upgrade the system and as you continue to do this you’re going to have added costs that you may not have been counting on. This can start to become a problem as you keep building.

No matter what you’re looking for in a system, you want to make sure that you’re getting something is going to protect your family and keep everyone safe. If you’re not careful, you could end up with problems and you may find that the system you’ve chosen isn’t going to do what you want it to do.

That means you could end up spending more than you expected or you could end up with a system that doesn’t work quite the way you wanted. With a laser system, you’re definitely getting a good quality system, but only you can decide if it’s what you really need.

END_OF_DOCUMENT_TOKEN_TO_BE_REPLACED

Lasers are different from other types of light because they create a narrow line of light whereas others, like flashlights, tend to spread it out.